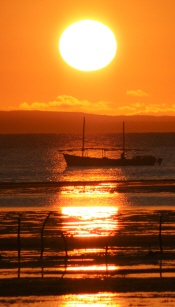 I think it’s a blessing that God hides the future from us.  If we knew how much work our life, our marriage, our kids, our…Radio Project was going to take, we’d never get started.  I think we’d be demoralized, giving up before anything ever got started.

So, with ignorance and optimism, we launch ourselves into all manner of endeavors.  And great things result, often creating “experience.”

In June of 2009 I finally began moving on something that had been in the back of my mind for the previous two years.  Something to do with Radio.  I wasn’t sure what—and I’m still not, really.  But there seems to be three streams of activity.

1) The development of my own content.  I have an idea for a fun show built around interesting words, like bombastic (which doesn’t mean what most people think it does), enthuse (which has a fascinating origin—ask me, I’ll tell you about it), and Trombipulation (which, if I get lucky, will lead me to a personal interview with one of the most amazing people on earth, Mr. George Clinton).  The program is called The Weekly Word of the Day, which, as a title, sows enough confusion to allow for a wide latitude of content, and possibly indicates that fun may also be involved.

Of even wider scope is a ‘show’ that’s circling overhead, seeking a place to land.  I’ll not mention it now as development is underway.  But you’ll be the first to know about it, as the original postings will be found here.

2) Fostering the development of content by others.  Certainly, I am not *the only* undiscovered genius out there.  And I’m equally certain that YOU can improve my content.  “Iron sharpens iron,” I’m told, and in the context of Radio Newark that means that we can help each other by reviewing posted material, providing feedback, guidance, suggestions, alternatives, and ideas as editors, listeners, and friends.

3) Content distribution.  I’ve built a streaming server and I’m working on a 32′ x 15′ Radio Room that will house the studio and production equipment.  It’s taken most of a year to get the walls up, the floor down, electrical and data lines run, lighting and insulation installed, and 43,627 other things that all had to happen in a very specific sequence using non-work, non-family time.  (Ha ha ha.  Also, by dint of ‘experience’ I’ve developed a working theorem that defines the relationship between time and money in Project-Space.  It’s 1.333 x SQRT (length of eternity) = 3 x (the maximum money available for the project).  In rough terms, about the time you’ve overspent your budget by 300% Hell will begin to freeze over.)

Basically, a year ago I gave myself permission to move these ideas from the back burner to the foreground.  As a direct result, things have happened.  The aforementioned Radio Room is nearing a State of Useability, needed equipment has been donated / loaned / procured, practice in the art of audio content development is an ongoing, regular activity, and determination to see Radio Newark toddle about has grown and solidified.  I’m now at a point where I can begin to share it with you, as I really know it’s going to happen.