I’ve been listening to the VOA for about forty years. My two favorite shows were the World Music show hosted by Georges Collinet (way before Afropop Worldwide) and a jazz show hosted by Willis Conover.  And I’ve always enjoyed the news on VOA.  It is much more International in scope, and far more interesting than hearing about a house fire in Philadelphia.

But you may not be familiar with the Voice of America.  So here are a few notes of introduction.

The Voice of America is a professional broadcast media outlet, funded by the United States government.  It is constrained by charter and practice to news that is unbiased and reporting that is thorough.  The charter states in part, that the “VOA will serve as a consistently reliable and authoritative source of news. VOA news will be accurate, objective, and comprehensive.”

The tone of the Voice of America was established by charter, but making objectivity a practical reality took some work.  One of those who set the pace of that work, back in the ’60s, was John Chancellor.  TIME magazine reported about his appointment as the Director of the VOA in August, 1965: 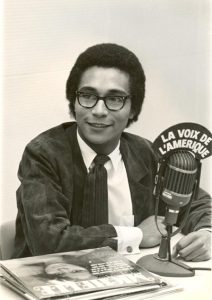 “He will need … aplomb in his new job. VOA is under attack, on the one hand, for broadcasting too much material critical of the U.S.; on the other, for trying to sell America too hard… Chancellor says that he intends to maintain VGA’s objectivity, reporting the bad as well as the good side of the news about the U.S.  [President]Johnson says he wants the same thing, though it can be argued that the Voice of America should not go out of its way to reflect the criticism of U.S. policies so regularly published in many newspapers and magazines. “Our main weapon is our freedom to make our own mistakes and solve our own problems out in the open,” says Chancellor.

The Voice of America Charter also states that “VOA will present the policies of the United States clearly and effectively, and will also present responsible discussions and opinions on these policies.”

VOA’s journalists also rely on a Journalistic Code, which lays out the standards for reporting accurate, objective, and comprehensive news. The Code establishes VOA’s principles and practices for “sourcing” stories, and ensuring accuracy, balance, fairness, context, and comprehensiveness.

We are very pleased to have the VOA’s award-winning newscast in Radio Newark’s hourly rotation.  At the present, you’ll find that segment near the bottom of the hour (thirty-minutes past the hour) on weekdays, and on the hour during weekends.

One comment on “Who is the “Voice of America,” really?”